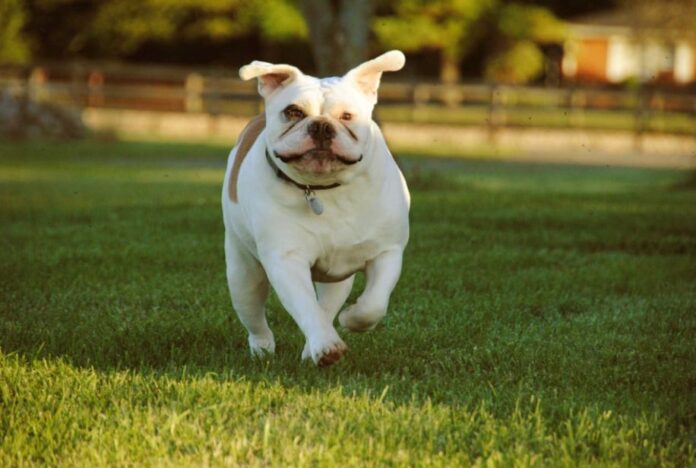 If you are looking for tough, strong, and intelligent dogs, an American Bulldog would be a great choice. They are used for showing, as sports dogs and even farm dogs. They were added to the American Kennel Club (AKC) Foundation Stock Services (FSS) last November 2019.

This breed of dog has a muscular build, especially its shoulders and chest. They also have short coats which do not require much grooming. Before, the color of this breed is white with red, brindle, or black spots, but now have grown different color patterns which include brown, fawn, and different shades of brindle. There can be seen bulldogs with blue spots, but the National Kennel Club Breed Standard disqualifies such. The appearance varies depending on its type.

In general, a bully should be fed dog food of high quality, and it should be well-balanced, especially up until they are 14 months old. This is to make sure that their bones and muscles will be developed well. It is expected that you would need to prepare your budget for their food as they grow up since it will be very expensive over time due to their size.

Following are the different types of American Bulldog which we will discuss one by one:

This originally came from the breeding line of John D. Johnson, which was bred during the World War II era. This is a heavy and stout line, and they have boxy skulls and classic overbite. This type stands 23-27 inches at the shoulder.

Although they look like a scary guard, they are friendly and goofy. They like to relax and take a nap, so be sure to make them go on an exercise or give them activities from time to time to avoid obesity.

A bully may look fierce and scary, but they are very loving, loyal, and also compassionate to their owners, including kids. They make good house guard dogs. However, if you plan on inviting over some friends, make sure you “introduce” them to your not-so-little pet as they get really mad at strangers.

This type of bulldog is generally healthy and has a life span of 10 to 16 years. You may also incorporate some health enhancers for a dog breed like this to make sure some rare health cases may also be avoided. You may check with your veterinarian about this.

This is said to be the oldest line of all American Bulldogs – the source of different types. These dogs are commonly seen in the South. This type of bulldog is purely white in appearance, with no spots like the others. Their legs are bowed, and their face is wrinkled.

As for their temperament, according to American Kennel Club, White English types are calm and happy dogs. However, there are times when they get overprotective, especially with toys and foods. Also, be careful with your belongings, especially those they could chew because they would love to chew them most of the time. This means you have to give them toys to chew.

This type has an average life span of 10 years and is considered unhealthy. This is because of some structure-related issues that they may have. For instance, a white English may have brachycephalic airway syndrome, a breathing disorder that may be caused by his squished face. Other than that, they may have Hip and elbow dysplasia, head shaking, etc. This is sad news for those who love English types, but you could always check with your veterinarian on how to keep your White English as healthy as possible.

This might be sad information to others, but this is a type of bulldog bred for fighting. They are very trainable and are trained for their purpose.

In the 1970s, Joe Painter, together with the others, developed this line. This did not succeed at first because of some defects developed during breeding, but after several tries and improvements, they started to be prominent over time.

When Johnson saved the bulldog breed from near extinction after World War II by looking for good breeding specimens, he was later on joined by Alan Scott. So this line is a cross-breeding of the early Johnson and another bulldog that were from the South.

The height of Scott American Bulldogs is approximately 22-27 inches. This line has a narrow head and muzzle, and their jaws are slightly dropped. This type is known for their “reverse scissors to bite”. Also known as an undershot, a reverse scissor bite is when there is no gap between the upper and lower jaw teeth. This is one unique characteristic of a Scott American.

As the name implies, these are the lines cross-bred from different types of bulldogs. This would depend on the preference of the dog owner. This is usually done when they have specific characteristics, appearance, and temperament preferences that are not present all in one type. Since this type varies, there is no standard color or size.